Wherever You're Starting From 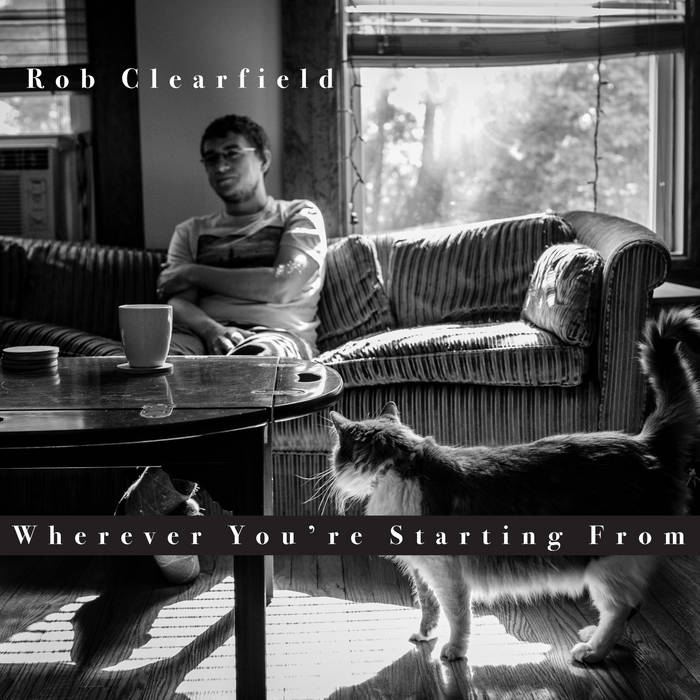 
Woolgathering Records is proud to announce the February 26, 2018 release of Wherever You’re Starting From, the fourth album by imaginative and innovative pianist Rob Clearfield. On the Chicago native’s second solo piano endeavor, Clearfield explores his fascination for a compositional approach to improvisation, which is highlighted through the albums distinct and dynamic sonic landscape.

“My hope is that some of the music sounds through-composed, some sounds like simple songs, and all of it sounds spontaneous.”

Clearfield’s compositions have been strongly influenced by his friend and colleague Makaya McCraven, the great Chicago-based drummer whose 2015 double LP In The Moment (International Anthem) is comprised of excerpts from live improvised performances. While touring together, Clearfield and Makaya had an in-depth discussion about an intriguing and innovative new approach to composing; improvising complete pieces by focusing more on individual moments.

“If a beginning or ending is slow to arrive, but a fully-formed spontaneous idea is captured in the middle, it’s a success!”

This new idea gave way to a renewed sense of freedom, both in the studio and during the editing process by allowing Clearfield to develop a strong ear for the elements of a piece that worked, and to then utilise, edit and produce them to a high standard, regardless of the other parts that didn’t make the cut. As a result, two tracks off the album begin with a fade-in, and one ends with a fade-out, highlighting short pieces which were originally inside larger pieces. The prologue and epilogue of the album were also chosen with this unique improvisational production approach at the forefront. Clearfield introduces and closes Wherever You’re Starting From with two takes of the same song.

Clearfield’s progressive and virtuosic compositional skill is rooted in both classical and jazz influences. Since the release of his debut album A Thousand Words in 2009, the established composer spent a considerable amount of time studying the canon of classical piano music, particularly the romantics (Brahms, Chopin, Rachmoninoff) and the impressionists (Ravel, Debussy).

“Their influence, particularly in regards to the textural palette of the piano, is at the forefront of the sound of this record.”

This 12-track opus includes two freshly interpreted tracks by two of Clearfield’s musical heroes: Johannes Brahms and John Coltrane. The inclusion of their music in this project represents the varied musical traditions Clearfield has spent his life studying: classical and jazz, composition and improvisation, solo piano and group playing, European music and Black-American music. While the Brahms piece is played in a straightforward manner, sans improvisation, Coltrane’s “Giant Steps” is only faintly recognizable at first; the melody doesn’t enter for several minutes, and the rhythm is stripped away almost completely.

Called “…one of [Chicago’s] most enjoyably unpredictable players” by Neil Tesser, Clearfield has taken part in a number of highly creative and genre-bending releases since his emergence on the scene over a decade ago. They including several releases with Matt Ulery (including 2016’s Festival, with Ulery’s Loom/Large, 2014’s In The Ivory, and 2006’s Music Box Ballerina, to name just a few), as well as with Dan Bruce (2017’s Earthshine), Adam Larson (last year’s Second City), and Jon Deitemyer (2016’s Tall Tales), among others. Clearfield’s previous releases include Islands (2016) on ears&eyes Records, The Long And Short of It (2013), a collaborative EP with Bethany Hamilton The Beauty That We Live In (2010) and his debut A Thousand Words (2009).

With each of his musical endeavours, Clearfield has always strived to be as expressive and as personal as possible. However, Wherever You’re Starting From represents a new level of vulnerability and exposure, that until now, Clearfield had not yet experienced with any past venture.

“Ultimately, I came to view this work as an autobiography of sorts. My trio and quintet records are like works of fiction, creating new worlds and characters in my own image. This, on the other hand, is more of a documentary. What you’re hearing is who I am, nothing more and nothing less.”

In anticipation of the February release, Clearfield is delighted to announce a mid-west Spring tour.
Rob Clearfield is a pianist, composer, and improviser who has performed his own original music across the United States. He has also performed and collaborated with many artists including Patricia Barber, Marquis Hill, Eighth Blackbird, Makaya McCraven, Greg Ward, Grazyna Auguscik, Rogerio Boccato, Howard Levy, John Wetton, Fareed Haque, Matt Ulery, Itamar Borochov, Adam Larson, Caroline Davis, and more. This is his fourth full-length album as a solo artist. More information about Rob Clearfield can be found here: robclearfield.com